Final assembly. It’s a big step! I expect it will take at least a couple of weeks, if not longer. There are still some items I’m shopping for or planning the build. 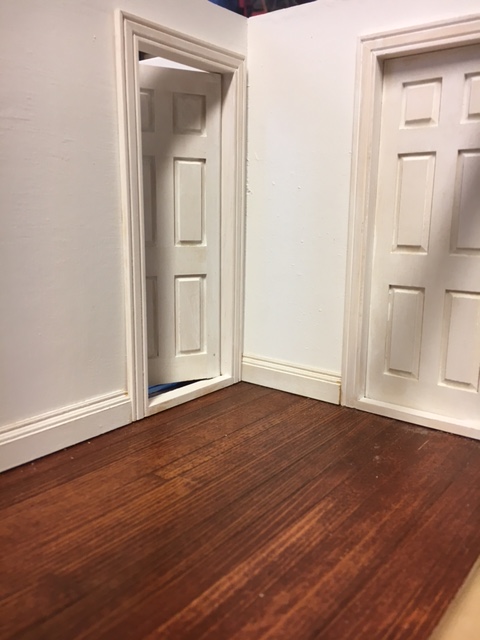 Above is the laundry room. The trim works out well! The floors turned out quite well. The product, a paper-backed wood veneer, looks really nice. It’s best used for smaller areas where you don’t need to butt the ends up. I have a plan moving forward for larger areas: Cut out the individual wood pieces with a razor and install them like regular full-sized flooring. There are two spots where I had to butt the ends up and they could look better.

Another package arrived from Miniature.com today. Love those people. Dining room furniture, washing and dryer and, after much ado, the victims have arrived. Reader be warned: read the whole description instead of relying on your search terms to weed out what you don’t want. The first set of dolls arrived looking very nice. And very large. Twice the size. They were described as such, but I was in a hurry and excited because of the demographics of the dolls. It didn’t work out that way. The proper sized dolls are here now, and the art of the project begins. Matching autopsy photos to the dolls will not be fun. Basically, I have to figure out a way to horribly defile these dolls in the same way the perpetrator did to his family. It’s a solid way to keep in mind that these were real people who died horrible deaths.

A humorous note: I’ve been crafting this for over six months. Razor knives, razor saws, band saw, belt sander, various sharp, vicious tools hanging out and being manipulated, often at odd angles in possibly in ways not intended by their designers. Unpacking the dolls proved to be the hardest thing I’ve done so far, judging from the nature of the injury I suffered. After carefully cutting the plastic vacuum sealed packaging, running my thumb under the edge to pull it apart resulted in the first injury on the job site. Who would have thought plastic would be so sharp? Currently the super glue seal is drying under a very-likely permanent band-aid. Truly a vocabulary expanding experience. I should have written down what I said when I did that. I am fairly sure I invented some new curse words. I did manage to clean off the real biological evidence as it would not do to contaminate the scene before I’ve begun to lay out the actual evidence.

Pictures should be coming at a fairly brisk pace! Assembly is going well!